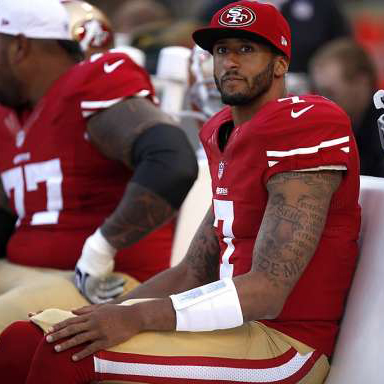 Modified from a blog I posted more than a year ago as his inspired philanthropy and advocacy warrants a revisit.

I wrote more than a year ago at the beginning of Colin Kaepernick’s national anthem protest that I wanted to give him a big hug of support.  The image of this singular individual abstaining from standing during the playing of the American anthem to bring attention to a spike of racial violence in many US cities, saddened me at the time. It now deeply inspires me.

It was a little heart breaking at the beginning of last season to see an individual so starkly alone and lonely in an act of brave and legitimate defiance.  His teammates (with exceptions), coaches, owners and the NFL as a whole had been sorely absent, awkward and frankly inept.  Sadly, that remains the case.

Male sports leagues have never been bastions of progressiveness.  But the NFL, keen on expanding the brand to Europe and beyond, is so behind the times compared to its professional league peers that a reputation meltdown is only a matter of time.  And the numbers don’t lie.  TV ratings for NFL games last season fell for the first time ever and several franchises struggled to hit capacity week in and week out.

NFL coaches and players talk about “playing with heart.”  Yet, the one player who has demonstrated this value more courageously and authentically than anyone remains ironically unemployed.   Yet, he will not relent or capitulate and the more the narrow minded NFL owners try to subvert his influence, the more he becomes a catalyst for real change.

Last season Colin Kaepernick stood alone. Through his own relentlessly brave efforts, he now leads a burgeoning movement within the NFL, professional sports and beyond.  He is, in my opinion, the true embodiment of authenticity and he will continue to be a force to be reckoned with.

Need help defining what “authentic” means for your organization? Drop us a line.

NEXT: Why claims of brand “authenticity” ring hollow