Rant: PR is not an adjective. Or even a verb. 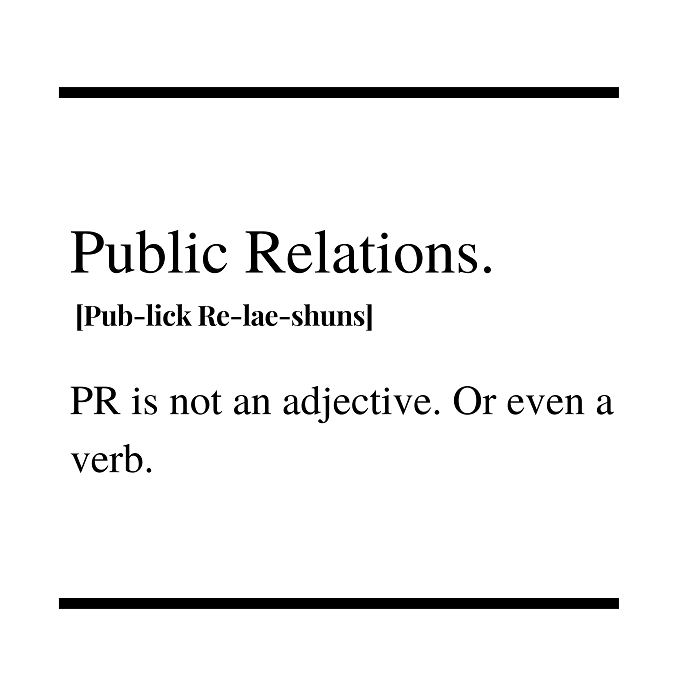 Like many others, I have been following the tumultuous changes in upper management at several media outlets across North America. The exposure of systemic racism within many of these organizations has led to a time of reckoning for the industry at large.

Why is PR being used as a synonym for insincere?

I was particularly irritated when I read outgoing LA Times Editor Peter Meehan’s “non-PR apology”/resignation screenshot. Would a “PR apology” in this case mean a more heartfelt version, one that demonstrated a genuine commitment to doing better?

PR is a widely misunderstood industry. One of my favourite events we have hosted at APEX is Family Night, where we invite friends and family into our office and show and tell them what we do for a living. The surprise on many parents’ faces when they learn that we are not in fact telemarketers, party planners, spin doctors, or publicists has been palpable.

On a more serious note, though, I felt it incumbent on me as a senior practitioner to point out that PR has in fact been at the core of some very awesome initiatives. For every Peter Meehan apology, there is a sincere PwC statement that accepted full responsibility for the Oscar flub that was heard around the world.

The heartfelt letter from Airbnb CEO Brian Chesky to his employees in the early(ish) days of the pandemic is a masterclass in communications in itself. What stands out is that Brian referenced the company’s mission statement and remained human in his communications in an extremely difficult time. Now THAT’S good PR.

PR at the heart of good

A few years ago, our team had the opportunity to partner on a powerful campaign for the YWCA Toronto, where what seemed to be a store opening for a new lifestyle brand, Blamé, was actually a gut-wrenching rally cry against domestic violence.

We were also honoured to be the agency of record for the city of Fort McMurray when the wildfires of 2016 hit and our communications support escalated overnight to deploying a small team to the city under extreme conditions with the immediate responsibility of establishing lines of communications and processes between the municipality, the province, the premier’s office as well as the fire chief, Red Cross and other key operational leads. When the crisis evolved from evacuation to re-entry, the rotating APEX team remained on the ground, managing the entire coordinated communications locally, provincially, nationally, and globally in collaboration with the Wood Buffalo communications professionals.

In an effort to raise awareness about the harmful consequences of societal labels, Diet Coke launched its [unlabeled] campaign and shed the labels on the soda cans’ packaging. At APEX, we have been helping companies be better allies to the LGBTQ2S+ community through our advocacy efforts in partnership with the Milkshake Sisters.

REI doubled down on its brand values in an unprecedented manner when it eschewed the holy grail of shopping events – Black Friday – and encouraged people to spend time in nature instead of in stores. While the business strategy was not intuitive, it resonated with the brand’s outdoorsy, minimalist target audience values.

Over the past few months of the pandemic, we have been impressed by our clients’ efforts to rise to the occasion and show up for their audiences. We have provided PR support as they, like several others, have changed their assembly lines to produce more PPE, brought fitness conveniently into members’ homes when gyms remain closed, helped parents ensure their kids are keeping up with their homework while school is out and offered relief in the form of reduced insurance premiums to those who are no longer commuting during the quarantine.

There are countless examples of good and bad PR. And there is absolutely such a thing as bad publicity. PR has the power to make, elevate, and endear a brand to its audience – if it’s done right. And there’s a heck of a lot of fun to be had along the way.

Rohini Mukherji is a Vice President at Apex Public Relations.

NEXT: The Pivot – Sombrero Latin Foods